A luxury stay in the Forest

A luxury stay
in the Forest 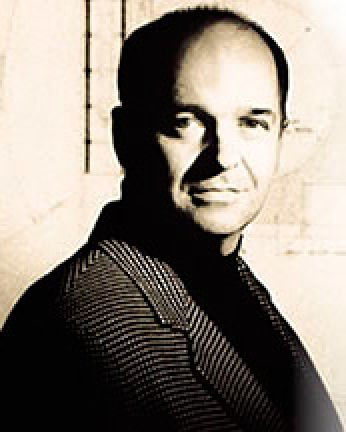 Probably, you think that there is no relation between Mito Plaza Hotel and the ancient city Kyoto, however the idea is true. It is manifested by the American inventor T.A.Edison who gave birth to filament lamp. But he was annoyed with the invention and looked for the filament’s material which can give out light for a long time. Then he met a bamboosmade in Hachiman, Kyoto. By this fateful encounter, he finally succeeded in completing the filament lamp. In Iwashimizu Hachiman Shrine, Hachiman City, there is the Edison Commemoration honoring such achievement.

Probably, you think that there is no relation between Mito Plaza Hotel and the ancient city Kyoto, however the idea is true. It is manifested by the American inventor T.A.Edison who gave birth to filament lamp. But he was annoyed with the invention and looked for the filament’s material which can give out light for a long time. Then he met a bamboosmade in Hachiman, Kyoto. By this fateful encounter, he finally succeeded in completing the filament lamp. In Iwashimizu Hachiman Shrine, Hachiman City, there is the Edison Commemoration honoring such achievement.

Now, the bamboo continues to live on the ground of Kyoto, watching for this Edison Commemoration. In addition, another intellectual gene also remains in existence there. The name of the man who has such a great gene is J.D.Edison. As a great-grandson of T.A.Edison, the interior designer took charge Mito Plaza Hotel. On the renewal project of this hotel, Grandeur and Coloring became so important task. He might inherit his great-grandfather’s memories and gene. Mirrors on wall used in lobby and indirect illumination on poles bring the image of red shrine gates standing against mountain top. By such rendition, grand atmosphere so that we can go through those gates and comfortable feeling of tension are produced in the lobby. On the other hand, another task shapes building’s interior into impressive one by bold use of color as Japanese ancient method. Japanese essence constantly appears and disappears in the space of Mito Plaza Hotel. There are lattice patterns at intervals. The pattern of tatami is arranged into western style, which makes a modern impression. Thus, Mito Plaza Hotel fusing together Japanese and Western motifs gives travelers comfort and excitement, as if filament light gives out soft light.

Simmons bed, unique furniture, carefully selected bath amenities as well as protection of privacy in our all guest rooms will never betray your expectation of comfortable stay with Mito Plaza Hotel. 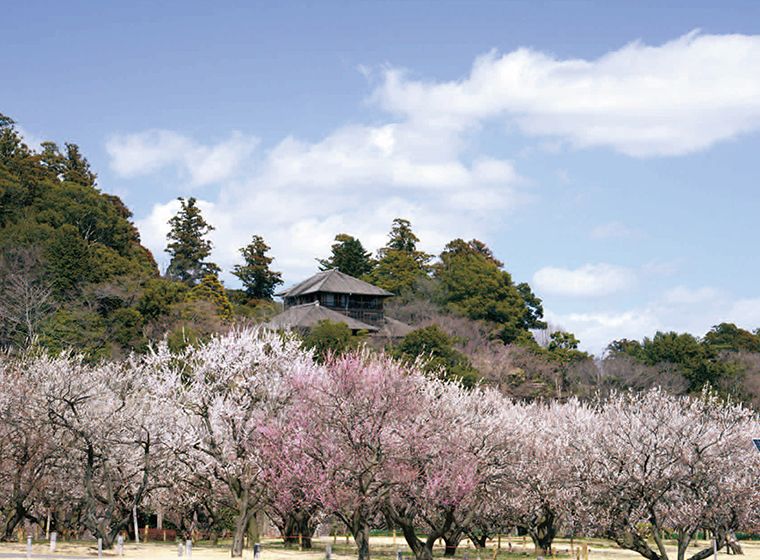 Kairakuen Park,compared with Kenrokuen(in Ishikawa) and Korakuen Park(in Okayama) is one of the three major gardens.Kairakuen Park was created as people’s resort by Nariaki Tokugawa in 1842.When Ume Festival begins from the late February,more than 3,000,over kinds of 100 japanese plums come into blossom. I recommend that you wander within the park such as koubuntei and Togyokusen. 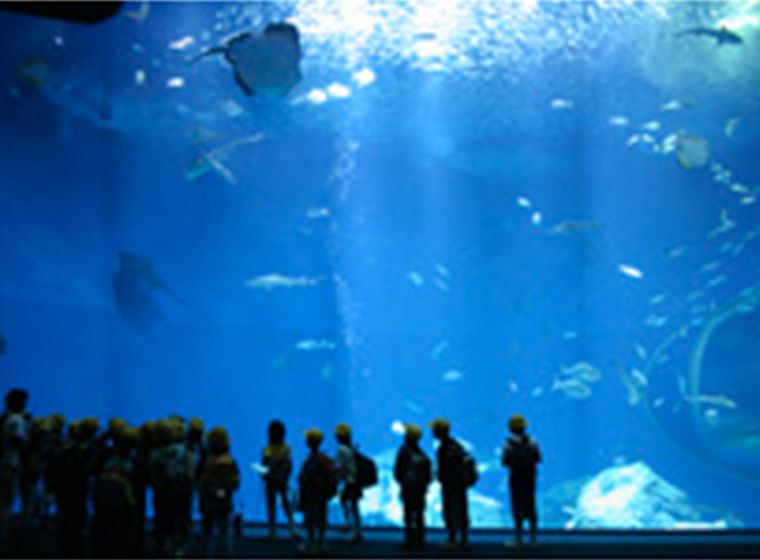 You can encounter world’s sea creatures amounting to 68,000,580 kinds.In particular,Ocean Live by Dolphins and Sea Lions,held forth a day,is caught on people. You can enjoy the performance by humorous sea lions and dynamic dolphins in the hall with the view of the sea of oarai. 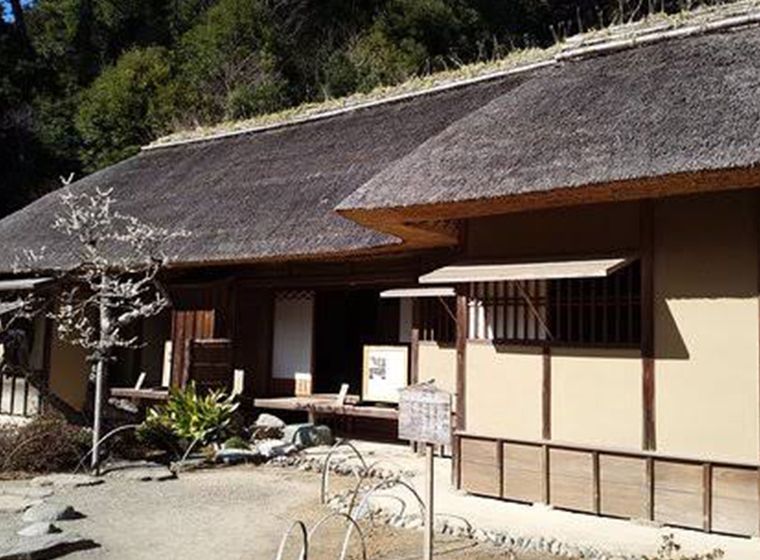 Seizan-so Villa is a place for Koumon’s retirement which is known for the drama “Mitokoumon”. The second domain head of Mito, Mitsukuni Tokugawa had spent for 10years, from transfer of family estate to his death. He promoted friendship with many people. Fukuroda waterfall is three major waterfalls, compared with Nachi Falls (in Wakayama; length 133m) and Kegon Falls (Tochigi; length 96m). The waterfall is separated into four levels, its width is large and it falls gorgeously as if a lappeted white cloth. This waterfall shows beautiful figures in each season, therefore it has another name “fourth waterfall”. Ryujin big suspension bridge is above Ryujin Dam which blocks the River of Ryujin in a beautiful landscape of Ryujin Canyon. The bridge’s length is 375 m, and it is the longest in Honshu as bridge for pedestrian. 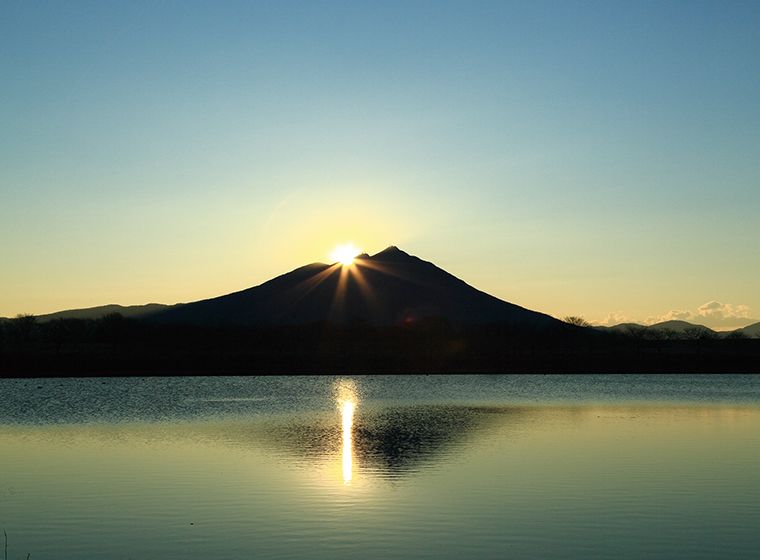 Mt.Tsukuba is one of the most famous mountains in Kanto areas.Mt.Tsukuba has been read by lots of songs since the era of Myriad Leaves, and the mountain is selected as one of 100 famous mountains of Japan, on a par with Mt.Fuji. The top of Mt.Tsukuba constitutes two mountain tips: Nantaizan (870m) and Nyotaizan (877m). If you use ropeway and cable car, you can enjoy climbing the mountain easily. 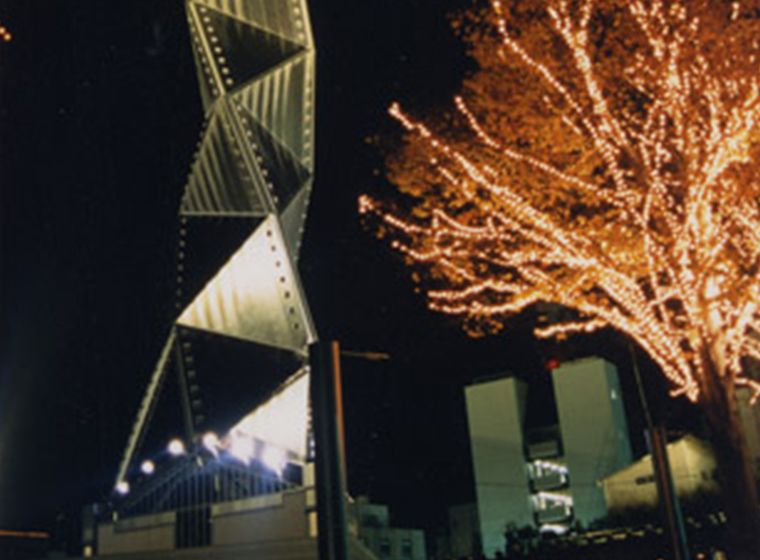 Art tower mito is a complex facility of concert hall ATM, ACM theater and modern art gallery. In its open space, there is a symbol tower with spiral form, so you commend a panoramic view of Mito City from its observation room. The tokugawa museum is only one museum, exhibiting all good treasures of Tokugawa Family of Mito, all over Japan. The museum displays 30,000 personal mementoes including belongings for Ieyasu Tokugawa in large part, the second domain head Mitsukuni Tokugawa’s belongings and mementoes for any other successive lords. You must not miss Mitsukuni’s Inrou which is known for Mitokoumon. Ibaraki Prefecture Gallery of Ceramics is the prefectural gallery specialized for ceramics. The gallery displays the greatest works of Japan, such as the Patriarch of modern ceramics Hazan Itaya, living national treasure Yasunari Matui,etc. Ibaraki Prefecture Tenshin Memorial Izura Gallery is a gallery honored the memory of the leader for Japanese pictures in modern era,Tenshin Okakura. The gallery is located at Izura Coast which is linked with him. In addition, there are works for artists born in Izura, too. The museum of modern art,ibaraki

You can appreciate some excellent works from domestic and foreign countries including Sculpture of Rodin, Renoir and Taikan Yokoyama, at the side of Lake Senba. Naka-Minato is the biggest fishing port in Ibaraki Prefecture. This fishes market has many fresh fishes and it is enthusiastically received. In addition, the market has belt-conveyor sushi and restaurants, so you can be satisfied with only meal. Fashion cruise newport hitachinaka is a large and complex shopping mall, belonging to “stay type for family”, has about 100 specialized stores (e.g.outlets). All people from children to adults can enjoy there. Resort outlets oarai is a shopping court of “natural proportion type” with the magnificent view of the pacific. The open-minded shopping mall has about 70 shops such as brand shops, sports shops, outdoor shops, shoes stores, chandleries and restaurants. 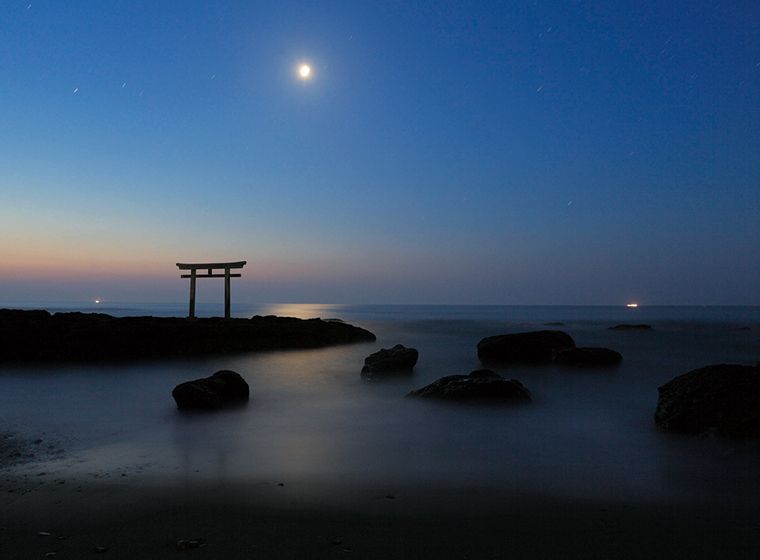 Oarai beach is a fashionable seaside spot. Oarai beach is a bathing resort with shoals and much sand. Nearby the area, there is Spa Noyukkura Health Building, campgrounds and yacht harbors. Hitachi seaside park, with about 153.2 ha in square, has grand-scale fields of flowers in patches. You can enjoy seasonal flowering grasses: daffodils and tulips in spring, nemophilas and roses in early summer, zinnias in summer and kokias and cosmoses in autumn. 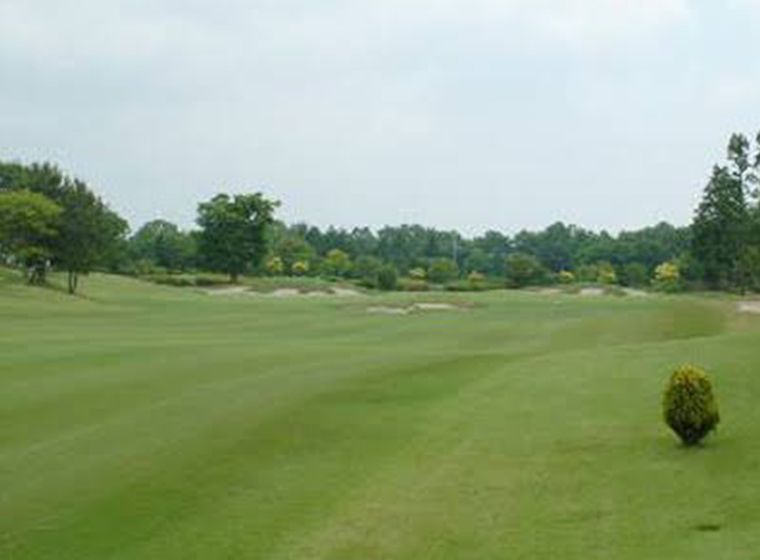 Kasama toyo golf club is characterized by vast fairway and rough, economical but enough-effect bunker, lateral water hazard having a presence and 18 hales in a hill having an abundance of game element. Great figurative art on natural canvas designed by Seiichi Inoue who died is so attractive. 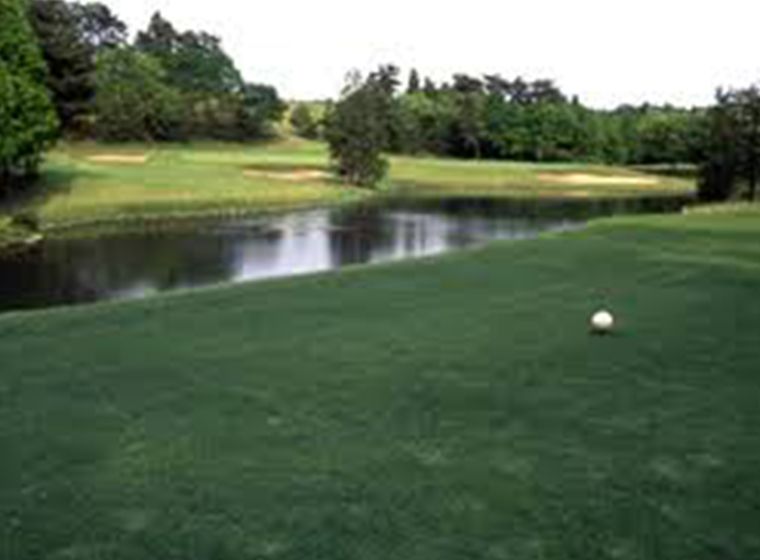 Within the course, a pond of arm with the width of 100,000 basis weigh and ponds of varying size take up landscape and give a boost to strategic characteristics. Golf course is flat. Bath is popular among women. Everyone can go to the golf course casually. In 1937, Ibaraki Airport had been established as Hyakugahara landing field for navy. Then, the place had been used as Hyakugahara military base for Japan Air Self-Defense Force. In March of 2010, the Ibaraki Airport was reborn as third airport for public and privacy in capital region,behind Haneda Airport and Narita Airport. In order to make environment that cut down cost burden of airlines, on the concept of “Low price, easy life, and compact!”, aircraft’s manners of operation and terminal building’s structure are reconsidered.

Festivals or events around Mito City

from February 20th to March 31st

Ume Festival, which has been held since 1896, is a big and historical event in Mito. There are about 1,000 Japanese plums in Kairakuen Park. When the plum season comes, special trains run within the park.

from late March to mid-April

More than 100 million, over 200 kinds of narcissuses are in all glory of the park every year. The landscape looks like a flower’s carpet.

Enjoy illuminated cherry blossoms at Lake Semba and Mt.Sakura, etc. Refer to Mito Tourism Association for more information on the time of bloom.

from late April to mid-May

The gorge features a 375 meter-long suspension bridge which is decorated with countless traditional carp streamers around Children’s Day in spring, in hope that children will grow up to be healthy and strong. The carp streamers are sent from all over Japan.

Golden Week in May

The Festival of Ceramics, held at Kasama Forest Park of Arts, Kasama City during Golden Week every year, is the biggest event in Ibaraki Prefecture. There are about 330 thousand visitors in the event and more than 200 potteries and ceramic artists set up their own shop.

The festival has been held during the first weekend of August every year since 1961. More than 4,100 fireworks are set off over Lake Semba and various events such as portable shrine, Mitokoumon Parade as well as citizen carnivals are taken place.

Rock-in Japan Festival, held at Hitachi Seaside Park, Hitachinaka City, has been the biggest outdoor rock festival in Japan since 2000. People all over Japan will gather for the major event every year.

from Mid-October to Late November

The oldest chrysanth festival in Japan, about 8,000 pots of chrysanth flowers are exhibited to show the styles of figures, standings and bonsai, etc.